As some of you are already aware, Pranks was accused of a new incident of harassment by someone posting on the ONE SHOT reddit page. This is the second accusation of misconduct against Pranks we have received in his tenure at ONE SHOT. The first incident surrounded events that took place during Prank’s time in college. You can read our full report on that incident, and Prank’s apology here. This most recent accusation is of a far different nature. Below is a screenshot of the accusation originally posted to our page: 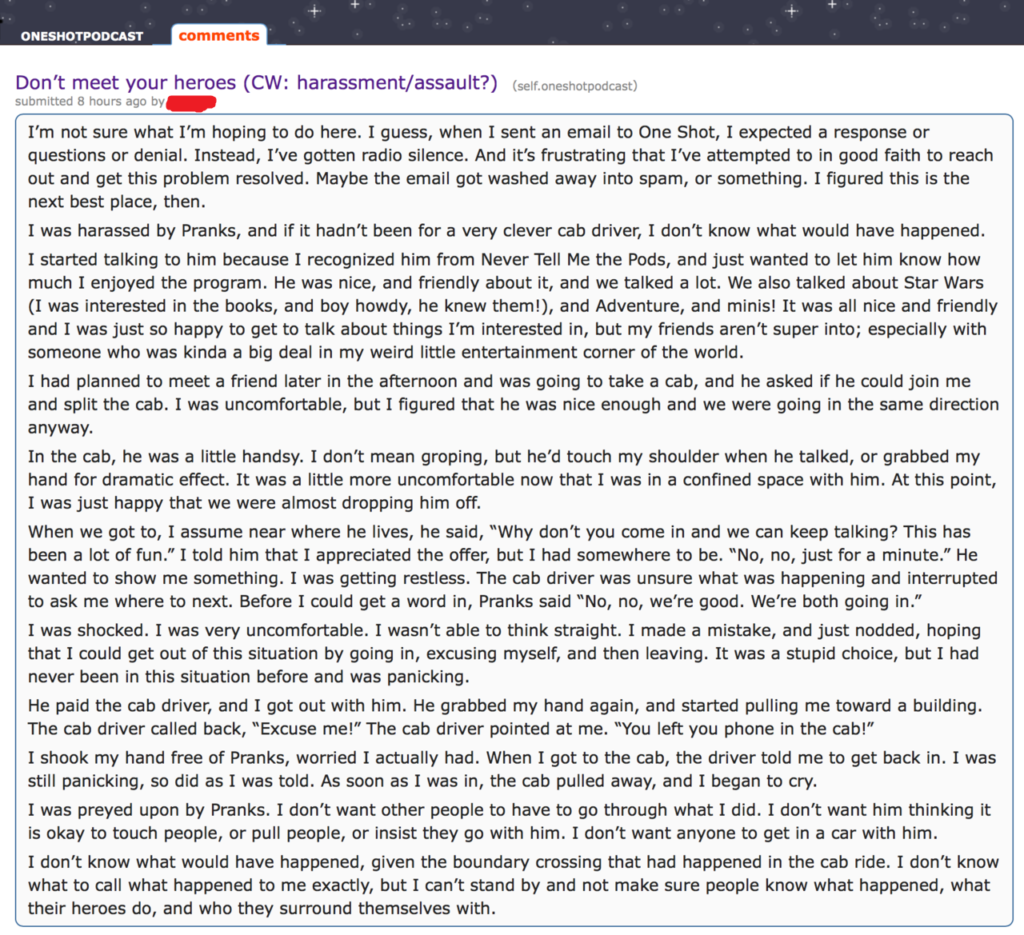 The behavior described in this accusation is completely unacceptable. Should we find that any ONE SHOT affiliate behaved this way with a fan, or any other person, we would dismiss them immediately.

Unlike the previous incident involving Pranks, he categorically denied any wrongdoing or even the possibility that a similar event took place. Meaning no chance meeting with a fan in a cafe, no split cab ride, and no physical contact with another person. It was easier to resolve the previous accusation, because he admitted to wrongdoing. In this case, we are forced to assess whether the incident happened, before deciding how to move forward from there.

Why Not Simply Believe the Victim?

We did. We responded to this matter as a serious claim against a personality on our network. That means opening an investigation, and calling upon our affiliate to admit wrongdoing and face the consequences, or offer undeniable proof that the event did not take place.

We were originally committed to dismissing Pranks even in the circumstance where we doubted claims against him, but lacked overwhelming proof to accompany that feeling. Our priority in a situation like this is community safety above everything else. If that meant dismissing someone we could not prove innocent, we were prepared to do that.

Unfortunately, we had to consider an uncomfortable fact as we proceeded with our investigation. ONE SHOT has been explicitly threatened by people who do not approve of the way we do business. 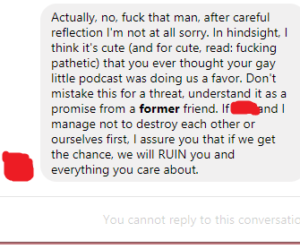 After a series of long and difficult talks, we ultimately determined that this approach was unethical and unsustainable. If one of the owners of this network was accused of harassment by an anonymous person, we could not simply dismiss them on the word of that anonymous person. We cannot hold our employees and affiliates to a standard we do not hold ourselves. Furthermore, if our organization was being targeted by a party that threatened us in the past, this approach would leave everyone we work with vulnerable to attack.

We also realized during our talks that it is impossible for us to be objective about a situation like this. Despite our good intentions, despite our desire to create a healthy community, there is no way we can be trusted to be fair in judging our friend.

We also had to ask the difficult question “does the way we currently do things help victims come forward?” The answer to that question was an emphatic “no.” Several times publicly and privately, the victim has noted that they regret coming forward, and are unsure that they can trust this process. This is without denial from our company, or a hostile response from our fans. Any situation that demands victims throw themselves at the mercy of their abuser’s friends is unsustainable.

A fair process must protect our employees from our harassers, it must also be unbiased, and make it safe for victims to come forward.

How Can We Do This Better?

It’s no secret that the games industry has been historically pretty awful at responding to allegations of harassment. Companies have refused to acknowledge the claims of victims, failed to communicate with their audiences, and in the worst cases, have attacked victims in attempts to protect their brands. We are tired of watching this. Games cannot be a safe space if victims cannot come forward.

One of the biggest problems with the way things are done now, is the size of the games industry. Most games companies, ONE SHOT included, are friends employing friends. There is no way for a victim to be treated fairly when the accused’s friends are expected to act as judges. Victims often don’t even feel comfortable identifying themselves, because it risks reprisal from their abuser, their abuser’s friends and co-workers, or even their abuser’s audience.

For that reason, ONE SHOT has elected to hire consultants to act as an unbiased third party. They will review the stories and evidence presented by the victim and the accused and render a verdict that our network will respond to accordingly. They have been instructed that they are not working on behalf of the ONE SHOT Network, but the games community at large. They have also been instructed to keep the victim’s identity and any other potentially sensitive information confidential, so the victim will be able to communicate with them without any fear. Their only duty is to examine the evidence, and render a judgement.

One of the reasons it took us so long to respond was our desire to work with people who would address this matter with a potential victim’s safety as a top priority. We consulted various individuals with expertise in the field. We decided against working with lawyers or HR firms, who wound up approaching the matter with the kind of “protect the company” mentality that’s helped create this unsafe environment in the first place. We needed someone who understood their responsibility was to the games community, not to a private company. In the long run, we chose to hire two PHD students in workplace psychology. It took us some time to be confident in our choice, and contract the consultants, but we’re enthusiastic about this relationship.

Having made our selection, we will hand over all the evidence we have gathered for our consultants to review. If they deem it necessary, they will make further inquiries with the victim and the accused. Once they reach a decision, they will write an opinion which we will publish here, along with any relevant evidence, and our response.

We would like to take this opportunity to apologize to the victim and our community for the initially clumsy response to this situation. These events unfolded in ways that challenged our preconceived ideas of how to handle a situation like this. We had to develop new methods as we went. For that reason, our response was slow and unfocused. We know this was a tense period for the victim. We also understand that must have frightened members of our audience who look to ONE SHOT to uphold community safety. We regret our part in making a bad situation worse.

We are committed to resolving this situation fairly, continuing to uphold our community safety standards, and elevating standards across the industry.