After saving the acolyte the wing is forced to confront the creature who attacked their flame. The Harvester of fear waits beneath the tree of pain can he be conquered?

In a world imperiled by a hungry darkness the guiding light is the flame of the Phoenix. A unit of elite Phoenix guards is dispatched to investigate a potential attack on one of their flame keepers. It is a matter of grave strategic importance. Failure to defend the flame could spell disaster for the region and threaten the already weakened order.

Deep in the heart of the Tim Horton’s corporate complex our team of mercenaries find themselves divided. With the complex on high alert due to multiple murders can our heroes hope to find the black site in time? Nothing less than Canada’s most legendary hero is at risk.

In the not too distant future the governments and civil powers of the world have been eclipsed by corporations in terms of scale and influence. Even in the freest of places, the wide white north of Canada. However, there are a few who cling to the last vestiges of freedom and individuality. These men and women risk their lives by performing missions on behalf of a counter culture that won’t be ruled by corporate influence. There one advantage is a the headspace, a mental link that binds them into a single entity.

…the irony is pretty lost on this particular group

The gang tangle’s with Ms. Whiskey’s ex- Vald. They discover their shared vision might be more serious than they originally anticipated. What next? Rooftop gunfights? Museum heists? Spiders exploding from the ceiling? Taylor Swift!? (… yes all of those things) 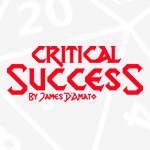 James invites Jon and Jef from the System Mastery podcast on to the show to talk about bad role playing games and how to avoid making them.

Three Brooklyn witches experience a vision and are forced to take action to investigate what they saw. Their vision will drive them to many perilous situations up to and including talking to squirrels, militant milk men, and breaking edge.

Last year sleepy town in Rode Island was shaken to its core when a mysterious sexy stranger moved to town, Not that town is in the grip of a mummy’s sexual curse. After a year of betrayal, dark magic, and FCC safe sex can our heroes live normal lives? What does normal even mean anymore!?

In space adventure wits around every corner. It is up to the brave men and women of the Cosmic Patrol to keep our solar system save for Space freedom, Space Democracy, and Space Capitalism.

Our adventures with the consortium continue with the journeys of the Centaur. To help us with this we brought the crew from the Improvised Star Trek Podcast on board.